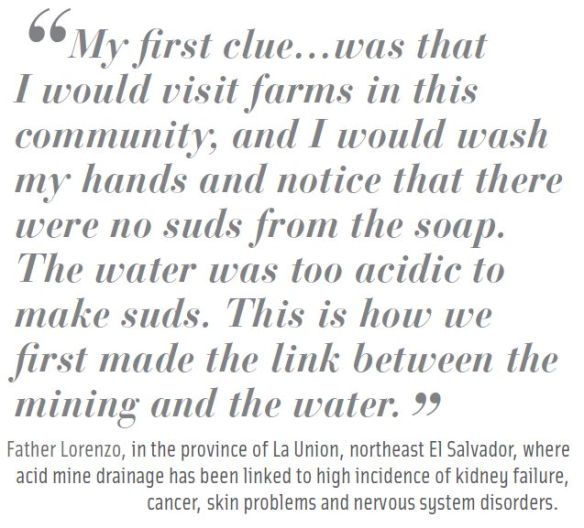 In addition to competing with ecosystems, agriculture and other livelihood needs for water use, the pollution of water systems will affect a far greater area than the parameters of the mine site itself.

The numerous processes carried out for just one mining operation can create multiple sources of water pollution and toxic waste – affecting agricultural lands and capacity for food production (not to mention foraging).

Acid Mine Drainage (AMD)
Rock that is dug up from deep underground contains sulphides, and becomes acidic when exposed to air. This so-called “overburden” waste rock is usually left in heaps of rubble in the vicinity of the mine site. Rainfall that passes through these rock heaps is turned acidic, and then enters into soil and water systems. This phenomenon is known as “acid mine drainage” (AMD) and is a common result of mining. It leaves soil and water systems acidic, and reduces soil fertility. AMD continues long after a mine has closed, and can render agricultural lands acidic and infertile for hundreds of years.

Heavy Metal Leaching
Waste rock brought up from deep underground and then discarded contains significant levels of heavy metals such as iron, nickel, copper, lead, arsenic and aluminum. AMD dissolves and leaches these metals from the rock. These toxic metals then enter water systems and contaminate food production. They can continue to leach into water systems for as long as AMD takes place, which can be decades or even hundreds of years.

Leakages and Spills from Tailings
To extract metals from rock, companies use highly toxic solutions of chemicals such as cyanide. Rocks are broken up into smaller pieces, and kept in a cyanide solution so that the metal dissolves. The metal is then extracted from the solution using electrolysis.

Storage or disposal of the chemical waste is a challenge for mining companies. The company may choose to build a “tailings dam” to store the waste cyanide solution. Leakages are common. Dams are also known to burst, especially during or after heavy rainfall. When this happens, highly toxic cyanide enters the soils, water systems and ecosystems. With climate change bringing more extreme weather events, such incidents are likely to become more frequent.

Tailings Disposal
Of the world’s 10 largest mining companies, only one has adopted policies against dumping their chemical waste in rivers and oceans. None have policies against dumping tailings in lakes. As mining expands globally, the deliberate dumping of toxic chemical waste into water systems will only increase unless action is taken urgently.

Mercury Disposal
Artisanal small-scale metal miners tend to use mercury to extract metal from rock (instead of cyanide). These miners often focus their activities along rivers, releasing mercury into water systems. Mercury is a persistent pollutant that remains in the environment, traveling far downstream and accumulating in fish, livestock, soil, vegetation and humans.